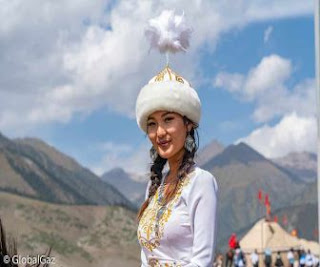 There are several theories on the origin of ethnonym Kyrgyz. It is often said to be derived from the Turkic word kyrk ("forty"), with -iz being an old plural suffix, so Kyrgyz literally means "a collection of forty tribes".It also means "imperishable", "inextinguishable", "immortal", "unconquerable" or "unbeatable", as well as its association with the epic hero Manas, who – according to a founding myth – unified the 40 tribes against the Khitans. A rival myth, recorded in 1370 in the History of Yuan, concerns 40 women born on a steppe motherland.
The earliest records of the ethnonym appear to have been the Chinese transcriptions Gekun (鬲昆, LH *kek-kuən < Old Chinese: *krêk-kûn) and Jiankun (堅昆, LH *ken-kuən < OC: *kên-kûn). Those suggest that the original ethnonym was *kirkur ~ kirgur and/or *kirkün, and another transcription Jiegu (結骨, EMC: *kέt-kwət) suggests *kirkut / kirgut. Yury Zuev proposed that the ethnonym possibly means 'field people, field Huns' (cf. Tiele tribal name 渾 Hún < MC *ɣuən). Peter Golden reconstructs *Qïrğïz < *Qïrqïz< *Qïrqïŕ and suggests a derivation from Old Turkic qır 'gray' (horse color) plus suffix -q(X)r/ğ(X)r ~ k(X)z/g(X)z.[Besides, Chinese scholars later used a number of different transcriptions for the Kyrgyz people: these include Gegu (紇骨), Jiegu (結骨), Hegu (紇骨), Hegusi (紇扢斯), Hejiasi (紇戛斯), Hugu (護骨), Qigu (契骨), or Juwu (居勿), and then, during the reign of Tang Emperor Wuzong, Xiajiasi (黠戛斯), said to mean "red face".Edwin G. Pulleyblank surmises that "red face" was possibly a folk etymology provided by an interpreter who explained the ethnonym based on Turkic qïzïl ~ qizqil, meaning 'red'.By the time of the Mongol Empire, the ethnonym's original meaning had apparently been forgotten – as was shown by variations in readings of it across different reductions of the History of Yuan. This may have led to the adoption of Kyrgyz and its mythical explanation.[citation needed]
During the 18th and 19th centuries, European writers used the early Romanized form Kirghiz – from the contemporary Russian киргизы – to refer not only to the modern Kyrgyz, but also to their more numerous northern relatives, the Kazakhs. When distinction had to be made, more specific terms were used: the Kyrgyz proper were known as the Kara-Kirghiz ("Black Kirghiz", from the colour of their tents),and the Kazakhs were named the Kaisaks. or "Kirghiz-Kazaks".

The Kyrgyz are a Turkic ethnic group. Recent linguistic, genetic and archaeological evidence suggests that the earliest Turkic peoples descended from agricultural communities in Northeast China who moved westwards into Mongolia in the late 3rd millennium BC, where they adopted a pastoral lifestyle. By the early 1st millennium BC, these peoples had become equestrian nomads. In subsequent centuries, the steppe populations of Central Asia appear to have been progressively Turkified by a East Asian dominant minority moving out of Mongolia.
The early Kyrgyz people, known as Yenisei Kyrgyz, have their origins in the western parts of modern-day Mongolia and first appear in written records in the Chinese annals of the Sima Qian's Records of the Grand Historian (compiled 109 BC to 91 BC), as Gekun (鬲昆, 隔昆) or Jiankun (堅昆). The Middle Age Chinese composition Tanghuiyao of the 8–10th century transcribed the name "Kyrgyz" as Jiegu (Kirgut), and their tamga was depicted as identical to the tamga of present-day Kyrgyz tribes Azyk, Bugu, Cherik, Sary Bagysh and few others.
According to recent historical findings, Kyrgyz history dates back to 201 BC. The Yenisei Kyrgyz lived in the upper Yenisey River valley, central Siberia. In Late Antiquity the Yenisei Kyrgyz were a part of the Tiele people. Later, in the Early Middle Ages, the Yenisei Kyrgyz were a part of the confederations of the Göktürk and Uyghur Khaganates.
In 840 a revolt led by the Yenisei Kyrgyz brought down the Uyghur Khaganate, and brought the Yenisei Kyrgyz to a dominating position in the former Second Turkic Khaganate. With the rise to power, the center of the Kyrgyz Khaganate moved to Jeti-su, and brought about a spread south of the Kyrgyz people, to reach Tian Shan mountains and Xinjiang, bringing them into contact with the existing peoples of western China, especially Tibet.
By the 16th century the carriers of the ethnonym Kirgiz lived in South Siberia, Xinjiang, Tian Shan, Pamir-Alay, Middle Asia, Urals (among Bashkirs), in Kazakhstan. In the Tian Shan and Xinjiang area, the term Kyrgyz retained its unifying political designation, and became a general ethnonym for the Yenisei Kirgizes and aboriginal Turkic tribes that presently constitute the Kyrgyz population. Though it is obviously impossible to directly identify the Yenisei and Tien Shan Kyrgyz, a trace of their ethnogenetical connections is apparent in archaeology, history, language and ethnography. A majority of modern researchers came to the conclusion that the ancestors of Kyrgyz tribes had their origin in the most ancient tribal unions of Sakas/Scythians, Wusun/Issedones, Dingling, Mongols and Huns.
Also, there follow from the oldest notes about the Kyrgyz that the definite mention of Kyrgyz ethnonym originates from the 6th century. There is certain probability that there was relation between Kyrgyz and Gegunese already in the 2nd century BC, next, between Kyrgyz and Khakases since the 6th century AD, but there is quite missing a unique mention. The Kyrgyz as ethnic group are mentioned quite unambiguously in the time of Genghis Khan rule (1162–1227), when their name replaces the former name Khakas.