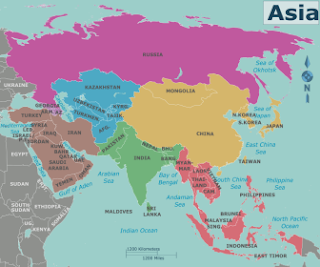 The ancestral population of modern Asian people has its origins in the two primary prehistoric settlement centres – greater Southwest Asia and from the Mongolian plateau towards Northern China.
Migrations of distinct ethnolinguistic groups have probably occurred as early as 10,000 years ago. However, about 2.000 BCE early Iranian speaking people and Indo-Aryans have arrived in Iran and northern Indian subcontinent. Pressed by the Mongols, Turkic peoples oftenly migrated to the western and northern regions of the Central Asian plains. Prehistoric migrants from South China and Southeast Asia seem to have populated East Asia, Korea and Japan in several waves, where they gradually replaced indigenous people, such as the Ainu, who are of uncertain origin. Austroasiatic and Austronesian people establish in Southeast Asia between 5.000 and 2.000 BCE, partly merging with, but eventually displacing the indigenous Australo-Melanesians.
In terms of Asian people, there is an abundance of ethnic groups in Asia, with adaptations to the climate zones of the continent, which include arctic, subarctic, temperate, subtropical or tropical, as well as extensive desert regions in Central and Western Asia. The ethnic groups have adapted to mountains, deserts, grasslands, and forests, while on the coasts of Asia, resident ethnic groups have adopted various methods of harvest and transport. The types of diversity in Asia are cultural, religious, economic and historical.
Some groups are primarily hunter-gatherers- whereas others practice transhumance (nomadic lifestyle), have been agrarian for millennia, or adopted an industrial or urban lifestyle. Some groups or countries in Asia are completely urban (e.g., Qatar and Singapore); the largest countries in Asia with regard to population are the China, India, Indonesia, Pakistan, Bangladesh, Japan, Philippines, Vietnam, Iran, Thailand, Burma, and South Korea. Colonisation of Asian ethnic groups and states by European peoples began in the late 1st millennium BCE, reaching its peak in the late 19th and early 20th centuries.