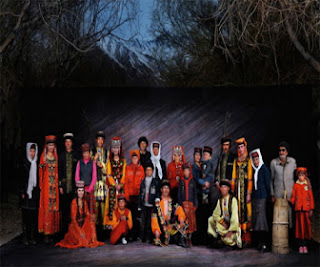 The Tajiks are an Iranian people, speaking a variety of Persian, concentrated in the Oxus Basin, the Fargana valley (Tajikistan and parts of Uzbekistan) and on both banks of the upper Oxus, i.e., the Pamir Mountains (Mountain Badaḵsan, in Tajikistan) and northeastern Afghanistan (Badaḵsan). Historically, the ancient Tajiks were chiefly agriculturalists before the Arab Conquest of Iran. While agriculture remained a stronghold, the Islamization of Iran also resulted in the rapid urbanization of historical Khorasan and Transoxiana that lasted until the devastating Mongolian invasion Several surviving ancient urban centers of the Tajik people include Samarkand, Bukhara, Khujand and Termez.
Contemporary Tajiks are the descendants of ancient Eastern Iranian inhabitants of Central Asia, in particular, the Sogdians and the Bactrians, and possibly other groups, with an admixture of Western Iranian Persians and non-Iranian peoples. According to Richard Nelson Frye, a leading historian of Iranian and Central Asian history, the Persian migration to Central Asia may be considered the beginning of the modern Tajik nation, and ethnic Persians, along with some elements of East-Iranian Bactrians and Sogdians, as the main ancestors of modern Tajiks. In later works, Frye expands on the complexity of the historical origins of the Tajiks. In a 1996 publication, Frye explains that many "factors must be taken into account in explaining the evolution of the peoples whose remnants are the Tajiks in Central Asia" and that "the peoples of Central Asia, whether Iranian or Turkic speaking, have one culture, one religion, one set of social values and traditions with only language separating them."

Regarding Tajiks, the Encyclopedia Britannica states

The Tajiks are the direct descendants of the Iranian peoples whose continuous presence in Central Asia and northern Afghanistan is attested from the middle of the 1st millennium BC. The ancestors of the Tajiks constituted the core of the ancient population of Khwarezm (Khorezm) and Bactria, which formed part of Transoxania (Sogdiana). Over the course of time, the eastern Iranian dialect that was used by the ancient Tajiks eventually gave way to Farsi, a western dialect spoken in Iran and Afghanistan.
The geographical division between the eastern and western Iranians is often considered historically and currently to be the desert Dasht-e Kavir, situated in the center of the Iranian plateau.[citation needed]

Further according to Richard Foltz

Since Turkic men often ‘married up’ and started families with Tajik women, the bloodlines tended to become increasingly mixed over the generations. (Recent DNA studies in Uzbekistan and Tajikistan have shown no notable genetic difference between modern Uzbeks and Tajiks.)

The language of the Tajiks is an eastern dialect of Persian, called Dari (derived from Darbarī, " royal courts", in the sense of "courtly language"), or also Parsi-e Darbari. In Tajikistan, where Cyrillic script is used, it is called the Tajiki language. In Afghanistan, unlike in Tajikistan, Tajiks continue to use the Perso-Arabic script, as well as in Iran. However, when the Soviet Union introduced the Latin script in 1928, and later the Cyrillic script, the Persian dialect of Tajikistan came to be considered a separate (Persian) language. Since the 19th century, Tajiki has been strongly influenced by the Russian language and has incorporated many Russian language loan words. It has also adopted fewer Arabic loan words than Iranian Persian while retaining vocabulary that has fallen out of use in the latter language. In Tajikistan, in ordinary speech, also known as "zaboni kucha" (lit. "street language", as opposed to "zaboni adabi", lit. "literary language", which is used in schools, media etc.), many urban Tajiks prefer to use Russian loanwords instead of their literary Persian analogs.
The dialects of modern Persian spoken throughout Greater Iran have a common origin. This is due to the fact that one of Greater Iran's historical cultural capitals, called Greater Khorasan, which included parts of modern Central Asia and much of Afghanistan and constitutes as the Tajik's ancestral homeland, played a key role in the development and propagation of Persian language and culture throughout much of Greater Iran after the Muslim conquest. Furthermore, early manuscripts of the historical Persian spoken in Mashhad during the development of Middle to New Persian show that their origins came from Sistan, in present-day Afghanistan.

Various scholars have recorded the Zoroastrian, Hindu, Buddhist, and Aryan pre-Islamic heritage of the Tajik people. Early temples for fire worship have been found in Balkh and Bactria and excavations in present-day Tajikistan and Uzbekistan show remnants of Zoroastrian fire temples.
Today, however, the great majority of Tajiks follow Sunni Islam, although small Twelver and Ismaili Shia minorities also exist in scattered pockets. Areas with large numbers of Shias include Herat, Badakhshan provinces in Afghanistan, the Gorno-Badakhshan Autonomous Province in Tajikistan, and Tashkurgan Tajik Autonomous County in China. Some of the famous Islamic scholars were from either modern or historical East-Iranian regions lying in Afghanistan, Tajikistan, Uzbekistan and Turkmenistan and therefore can arguably be viewed as Tajiks. They include Abu Hanifa, Imam Bukhari, Tirmidhi, Abu Dawood, Nasir Khusraw and many others.
According to a 2009 U.S. State Department release, the population of Tajikistan is 98% Muslim, (approximately 85% Sunni and 5% Shia). In Afghanistan, the great number of Tajiks adhere to Sunni Islam. The smaller number of Tajiks who may follow Twelver Shia Islam are locally called Farsiwan. The community of Bukharian Jews in Central Asia speak a dialect of Persian. The Bukharian Jewish community in Uzbekistan is the largest remaining community of Central Asian Jews and resides primarily in Bukhara and Samarkand, while the Bukharaian Jews of Tajikistan live in Dushanbe and number only a few hundred.From the 1970s to the 1990s the majority of these Tajik-speaking Jews emigrated to the United States and to Israel in accordance with Aliyah. Recently, the Protestant community of Tajiks descent has experienced significant growth, a 2015 study estimates some 2,600 Muslim Tajik converted to Christianity.
Tajikistan marked 2009 as the year to commemorate the Tajik Sunni Muslim jurist Abu Hanifa, whose ancestry hailed from Parwan Province of Afghanistan, as the nation hosted an international symposium that drew scientific and religious leaders. The construction of one of the largest mosques in the world, funded by Qatar, was announced in October 2009. The mosque is planned to be built in Dushanbe and construction is said to be completed by 2014.