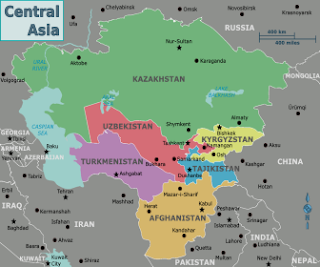 Central Asia is a diverse land with many ethnic groups, languages, religions and tribes. The nations which make up Central Asia are five of the former Soviet republics: Kazakhstan, Kyrgyzstan, Turkmenistan, Tajikistan, and Uzbekistan, which have a total population of about 72 million. Afghanistan is not always considered part of the region, but when it is, Central Asia has a total population of about 122 million (2016); Mongolia is also sometimes considered part of Central Asia due to its Central Asian cultural ties and traditions, although geographically it is East Asian.  Most central Asians belong to religions which were introduced to the area within the last 1,500 years, such as Sunni Islam, Shia Islam, Ismaili Islam, Tengriism, and Syriac Christianity. Buddhism, however, was introduced to Central Asia over 2,200 years ago, and Zoroastrianism, over 2,500 years ago.
The ancestry of modern Central Asian populations is significantly derived from the Indo-Iranian and Turkic expansions. Most modern populations can be aligned with either Indo-Iranian or Turkic descent, with ancestry corresponding well with ethnic boundaries.
Archaeogenetic studies on the remains from Iron Age Pazyryk culture burials suggest that after the end of the Indo-Iranian (Scythian) expansion, beginning in c. the 7th century BC, there was a gradual east-to-west influx of East Eurasian admixture to the Western steppes.
Populations of farmers and nomadic pastoralists coexisted in Central Asia since the Chalcolithic (4th millennium BC). The two groups differ markedly in descent structure, as pastoralists are organized in exogamous patrilineal clan structures, while farmers are organized in extended families practicing endogamy (cousin marriage). As a consequence, pastoralists have a significantly reduced diversity in patrilineal descent (Y-chromosome) compared to farmers.