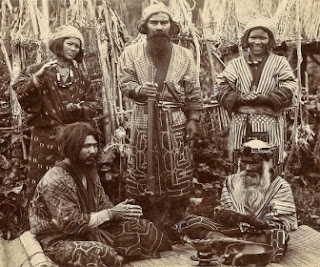 "Ainu" means "human". The Ainu people, are an indigenous ethnic group of people who live in Hokkaido, Japan today as well as in parts of Russia (the Kuril Islands and Sakhalin), who regard things useful to them or beyond their control as "kamuy" (gods).

In daily life, they pray to and performed various ceremonies for these 'gods', which include "nature" gods such as of fire, water, wind and thunder; "animal" gods, such as of bears, foxes, spotted owls and gram-puses; "plant" gods, such as of aconite, mush-room and mugwort; "object" gods, such as of boats and pots; and gods which protect houses, gods of mountains and gods of lakes. The word "Ainu" refers to the opposite of these gods. In their Yukar Upopo (Ainu Legends) is told, “The Ainu lived in this place a hundred thousand years before the Children of the Sun came”.
Traditionally, the Ainu sacrificed bears in order to release the 'kamuy' within them to the spirit world. One tradition, called 'lotame', involves the raising of a young bear cub as if it were an Ainu child and then sacrificing once it has come of age. The 'iyomante' ceremony involves cleansing the bear during this sacrifice. The Ainu are very proficient in elaborate woven fabric, called "Attush" which is reminiscent of the Yoruba Aso-Oke. They fashioned moccasins out of fish scales and expertly carved canoes and tools alike.
The Ainu people had various types of marriage. A child was promised in marriage by arrangement between his or her parents and the parents of his or her betrothed or by a go-between. When the betrothed reached a marriageable age, they were told who their spouse was to be. There were also marriages based on mutual consent of both sexes.In some areas, when a daughter reached a marriageable age, her parents let her live in a small room called tunpu annexed to the southern wall of her house.The parents chose her spouse from men who visited her.
The age of marriage was 17 to 18 years of age for men and 15 to 16 years of age for women, who were tattooed. At these ages, both sexes were regarded as adults.
When a man proposed to a woman, he visited her house, ate half a full bowl of rice handed to him by her, and returned the rest to her. If the woman ate the rest, she accepted his proposal. If she did not and put it beside her, she rejected his proposal. When a man became engaged to a woman or they learned that their engagement had been arranged, they exchanged gifts. He sent her a small engraved knife, a workbox, a spool, and other gifts. She sent him embroidered clothes, coverings for the back of the hand, leggings and other handmade clothes.
Chishima Ainu working
The worn-out fabric of old clothing was used for baby clothes because soft cloth was good for the skin of babies and worn-out material protected babies from gods of illness and demons due to these gods' abhorrence of dirty things. Before a baby was breast-fed, they were given a decoction of the endodermis of alder and the roots of butterburs to discharge impurities. Children were raised almost naked until about the ages of four to five. Even when they wore clothes, they did not wear belts and left the front of their clothes open. Subsequently, they wore bark clothes without patterns, such as attush, until coming of age.
Newborn babies were named ayay (a baby's crying), shipo, poyshi (small excrement), and shion (old excrement). Children were called by these "temporary" names until the ages of two to three. They were not given permanent names when they were born. Their tentative names had a portion meaning "excrement" or "old things" to ward off the demon of ill-health. Some children were named based on their behaviour or habits. Other children were named after impressive events or after parents' wishes for the future of the children. When children were named, they were never given the same names as others.
Men wore loincloths and had their hair dressed properly for the first time at age 15–16. Women were also considered adults at the age of 15–16. They wore underclothes called mour and had their hair dressed properly and wound waistcloths called raunkut and ponkut around their bodies. When women reached age 12–13, the lips, hands and arms were tattooed. When they reached age 15–16, their tattoos were completed. Thus were they qualified for marriage.